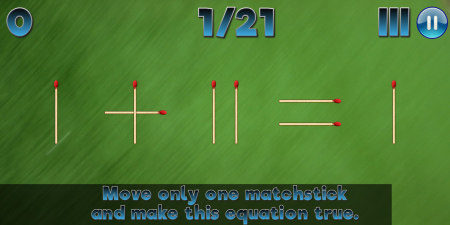 Roman Math XXI is a classic matchsticks game with the twist. With roman numerals your task is to solve 21 different mathematical problem in a given time. Moving one or more matchsticks you will get a correct result.

By activating the game, start screen will show the first equation for you to solve. The matchsticks reperesents equation with a roman numerals I + II = I. This is obviously incorrect. By moving only one matchstick, as shown in counter line, the result will be correct.

In upper left corner of the screen your current score is shown. In the middle you can see on which level you are playing, and on the right side there is a mark of remaining attempts that depletes per one each time you miss. At the right end, there is a pause button

for you to use. As instructed, to get the correct result, in the counter line move only one matchstick using full drag and drop functionality. You have to select the matchstick you wish to move and just drag and drop it in desired position. In this case if you move a match from the second number of the equation on the right side you will transform I + II = I to I + I = II which makes the equation correct. Note: some equations might have more than one solution.

If you solve the equation you will see the sign

and counter will raise for 30 seconds (up to max. 90 seconds). If you miss you will see the sign

and you will loose one of the three attempts that you have per game. If you are running out of time you can pause the game to give you some time to get the right solution.

Game is completed when you finish all 21 levels. Game is over when you run out of time or you use all available attempts not getting the equation true. In any case a final screen will show up with achieved score and your hi-score from previous playing to compare. From here you can choose to play the game again or to play other games on our website.